Art was not Luciano Sorlini’s only passion.
Since he was a boy, he approached the flying industry by taking aeromodelling courses held by R.U.N.A (Reale Unione Nazionale Aeronautica) building several model aircraft. He got a Pilot Licence in 1952 and in 1956 he got, first non-professional civil pilot in Italy, the instrument flight certificate (this type of certificate allows flying without visibility on aircraft with appropriate instruments).
He also took part in many aircraft competitions including Giro Aereo di Lombardia, Esaveneto and Giro di Sicilia always ranking among the top.
He has piloted many planes over the years, including vintage planes.
His first plane was “Macchino” i.e. the Macchi MB308 and then a Swedish Saab Safir 91C, a ground-breaking plane back then.
In 1960 he ceased flying to fully focus on his new company.
He resumed flying in 1980 when he bought a Beechcraft Bonanza, still part of his collection.
These were the years he became passionate about restoration of vintage aeroplanes.
Currently, the aeroplanes – kept at the Calvagese and Ceresara (Mantua) hangars – belong to his daughter who – alongside her husband Giovanni Marchi – keeps them airworthy.

FIND OUT MORE ON HOW TO RESERVE A TRIP TO THE MARTES MUSEUM OR HOW TO TAKE PART IN THE FLYING MUSEUM EVENTS FOR FURTHER INFORMATION VISIT THE WEBSITE.

Considered the Rolls Royce of the single-engine aircraft, it was put into production in 1945. Back then, the United States of America needed aeroplanes to keep the thousands of pilots trained during World War II airworthy; it was then that Beechcraft put the four-seater model 35 into production, followed by the six-seater model 36 in the 70s. It has a Continental TSIO-520 Turbocharged 300 Hp engine. This plane was bought new in 1980 and it was delivered in flight by the USA. It is instrument flight certified. 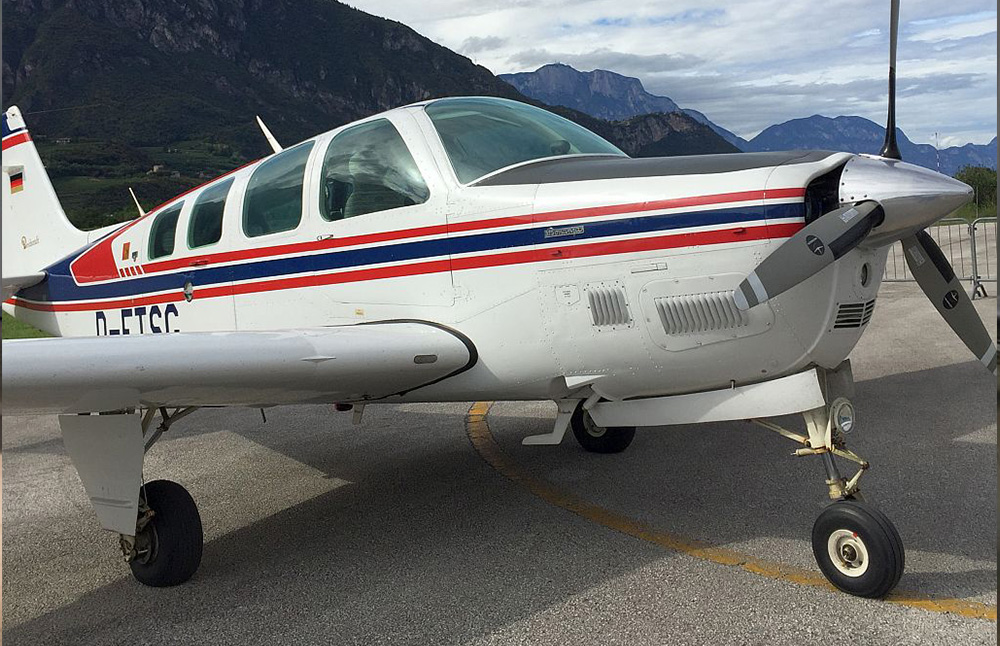 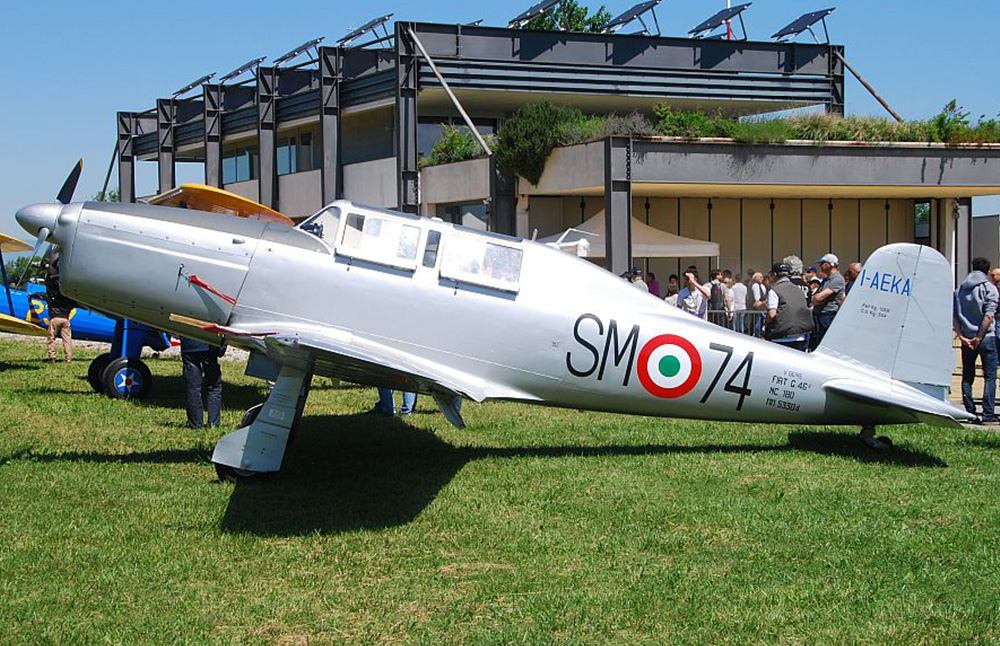 It was developed by Engineer Faraggiana under the supervision of Engineer Gabrielli immediately after the war. It came in the one-seater and two-seater versions. 225 models of this aircraft were manufactured and the test pilot Vittore Catella flew it for the first time in autumn 1947. It is basically a trainer aircraft and it was sold in Argentina, Syria and Austria with different engines. Obviously, the Italian Air Force too bought several models and, since 1958, an approximately fifty models were sold to Aero Club. Once their flight hours were exhausted, they were revoked and demolished given that they were too expensive to manage and maintain. The model of the collection was bought by an agricultural machinery manufacturer who left it exposed to the harsh weather in the court in front of the factory. It was restored in the Sorlini repair workshop, taking about three years of work and completed in 1989. It has an aluminium frame and mounts a 125 hp Alfa Romeo 115 Ter engine.

These aeroplanes were put into production from 1938, consisting of more than 16,500 models that came in various versions. Starting from the BT-9 basic trainer version all the way to the AT-6 advanced trainer model after numerous modifications. It was the world’s most popular trainer. It was actually nicknamed “The pilot maker” and was used for training pilots for machines such as P-40s, P-47s and P-51s. In Italy, it was used by the Italian Air Force from 1948 to 1980. 250 models were deployed in various versions. This specific model was manufactured in 1954 by Canadian Car under the licence of North American. It was revoked by the Air Force in the 80s. Bought by a metal recycling company as a wreck, it was fully rebuilt and made airworthy. It has an aluminium frame and mounts a Pratt & Whitney R1340 PC1 nine-cylinder radial engine capable of developing 600 hp. 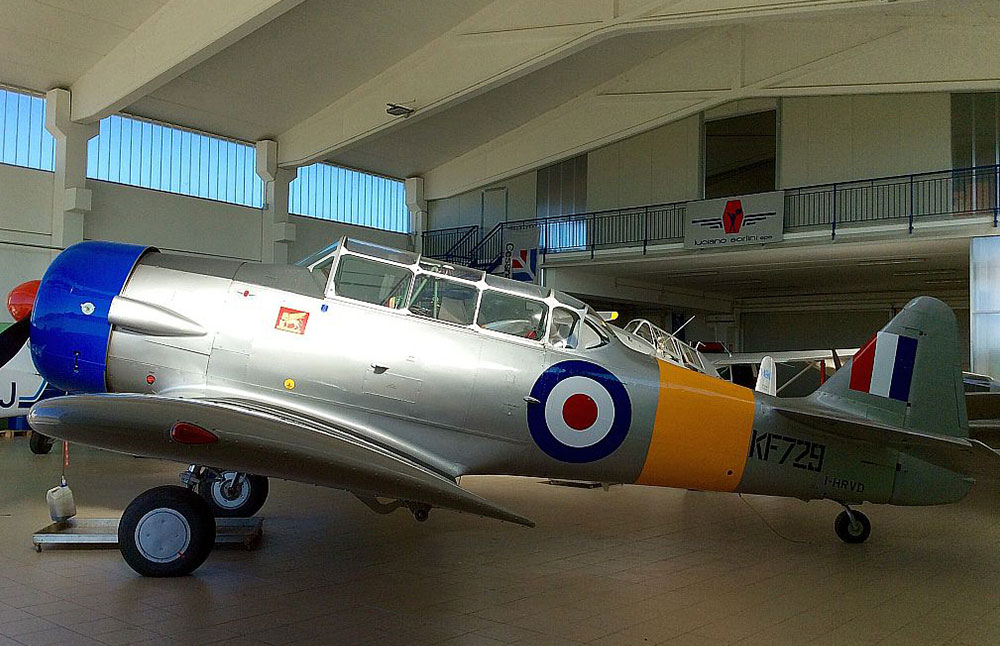 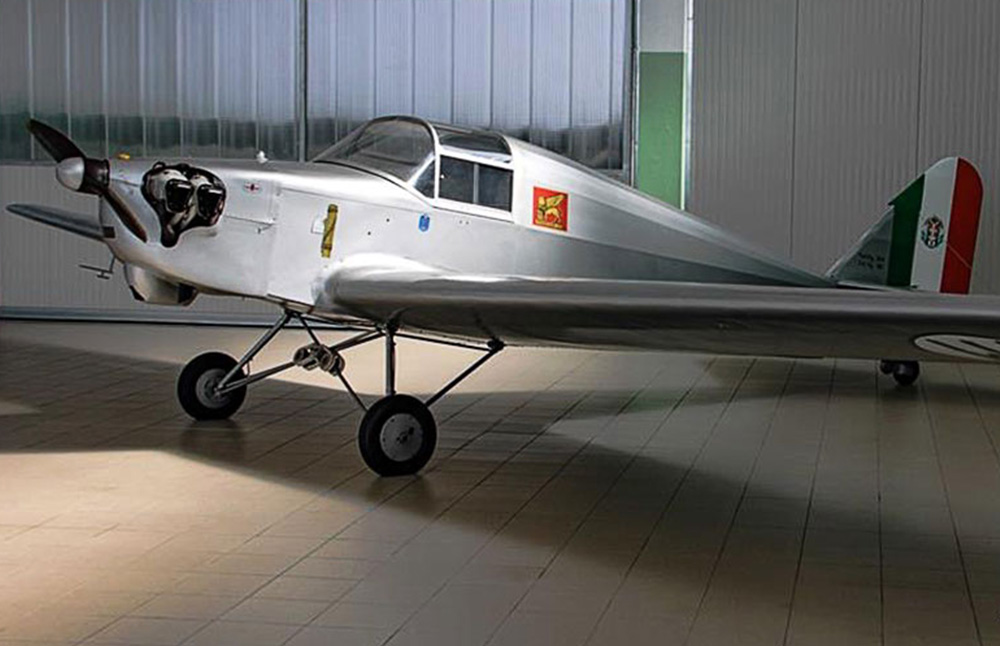 It was manufactured on behalf of Francis Lombardi who tested it in autumn 1938. It was awarded a ministerial tender as an ultra-economic trainer. Fully made of wood and covered with plywood and canvas, it mounted a 60 hp CNA engine. Though excellent in terms of flight features, it was basically rejected by the military trainers on the grounds that it was too easy and unsuitable for training. It was thus abandoned or used as a liaison aircraft throughout World War Two. After 8th September, Luftwaffe profitably used at least 250 models. After the war, the Vercelli-based AVIA manufacture about fifty of them mounting the 65 or 85 hp Continental engine which, alongside the remaining previous ones, were crucial towards reviving the Italian civil aviation industry. All an all, a total of approximately 400 units were manufactured. The model part of our collection was bought by Aero Club Venezia. The construction number is 1/A dated 1946 with Civil Registration Certificate n° 3014 issued on 30 July 1946: this date was officially assigned as the first post-war civil registration. The Genio Aeronautico (Italian Engineering Regiment) punching on almost all metal parts show that construction dates back to a previous military order. Thus, it likely dates back to 15 February 1941 as observable from the CNA D4 engine. It was assigned the military serial number 30257.

This is a trainer aircraft designed to carry a stretcher. It was constructed by Swedish company Saab and under the licence of the Dutch company De Shelde based on military specifications. An overall 323 models were manufactured in various configurations. It was used both for military and civil purposes in approximately twenty countries.
It flew for the first time on 20 November 1945 while the last model was manufactured in July 1966. Its frame is entirely made of aluminium with cantilevered wing and a retractable tricycle landing gear. The project was designed by Anders J. Andersson who had collaborated in designing Bűcker Bű181. The planes actually share some features. This version, the third, characterised by a four-seater cabin, wing tanks and equipped with a 185 hp Lycoming O-435A engine, was constructed in 1953. It is fully acrobatic. One of its interesting features lies in the ease of disassembling the wings within a few minutes so as to allow transportation thereof on a trailer or truck. The construction number of this model is 91319 dated 1954 while the Registration Certificate was issued on 5 December 1955. This model was bought new by Mr. Sorlini who collected it personally in Sweden and flew it to Italy. 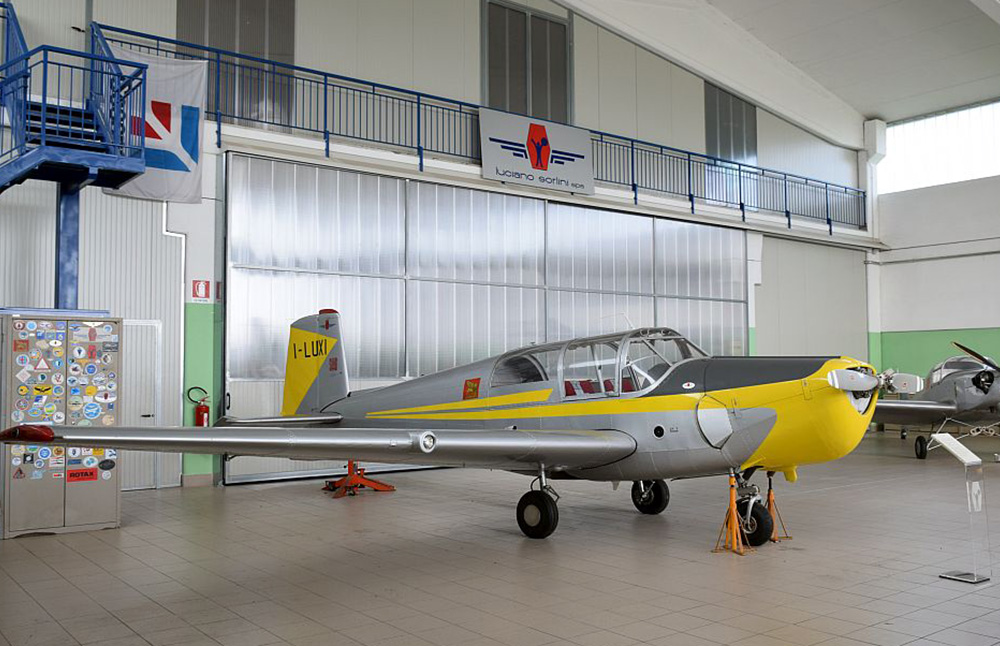 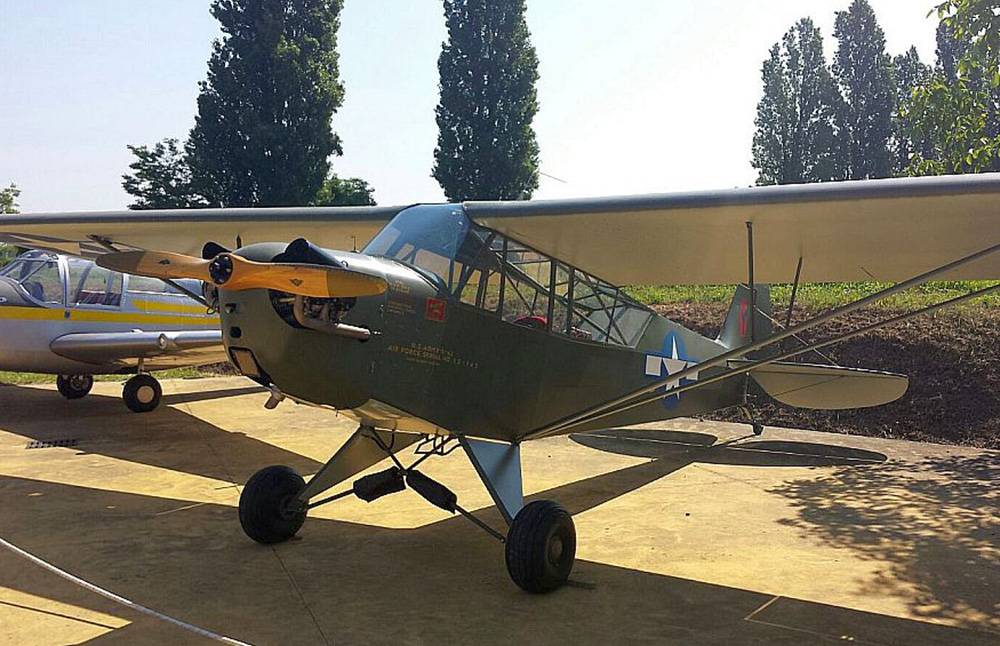 This is the military version of Piper J3 Cub (Cucciolo). The sole difference with the latter lies in the larger windows needed due to the fact that it was especially used as a reconnaissance aircraft and for adjusting artillery fire in the battlefields. It flew for the first time in 1937 and more than 1,000 models thereof had been constructed by late 1941. Model PA 18 Super Cub was constructed in 1949. It has a trestle structure made of steel pipes with some wood and aluminium components covered with canvas. It has a 65 hp Continental A65 engine. Bought by Aero Club Brescia in the 80s, this model was fully restored to its historically original conditions.

Constructed by Aeronautica Macchi in the 40s and designed by Engineer Bazzocchi, it is commonly referred to as “Macchino”. It is made of a wooden frame and canvas, a stylish cantilevered wing same case applying to the ogive-shaped empennages. It was the first Italian aircraft to mount a tricycle landing gear and a steering wheel instead of the conventional cloche. The prototype was equipped with a 60 hp CNA D4 engine while the subsequent models intended for the civil market came with 65, 85 or 90 hp Continental engines. Continental C85 engines were used for the military market. 120 models were constructed. It has been used as private and trainer aircraft in our Aero Club for more than 25 years and it also came with the sea plane version with a 90 to 100 hp engine. It was also designed as a three-seater. It was used in numerous and prestigious aircraft competitions by famous pilots. Mr. Luciano Sorlini owned a MARCHE I-LUGI model which was his first plane. He bought it in 1951 and took part in various competitions always ranking among the best. These competitions included Giro Aereo di Lombardia, Esaveneto, Giro di Sicilia, to name but a few
I-BIOH was constructed in 1950 with construction number 121 Marche Militari 53074. It was part of the 80-machine batch ordered by the Italian Air Force to renew its trainer aircraft fleet and above all to boost the revival of the post-war national aviation industry. I-BIOH remained property of the Air Force up to 1966 before being operated by various Aero Clubs starting from Biella and then Turin. During its time at the Aero Club of Turin, it took part – piloted by Emilio Tessera Chiesa – in various editions of Giro dei Castelli Piemontesi winning the third edition of the competition in 1963. 1965, I-BIOH was moved to the Aero Club Parma and the Italian Air Force transferred the ownership of the aircraft from now henceforth. It was subsequently sold to an individual in 1974 and used by Aero Club Bolzano up to 1986 when Luciano Sorlini bought it and started full restoration thereof conferring it its original grey livery and the three-colour cockade of the Italian Air Force. In November 2015, this Macchino became the property of Mr. Alessandro Messina and returned to its old premises at Aeritalia, at Aero Club Torino, rekindling old fond memories by many elderly pilots who had flown and vividly remembered it. This aircraft owned by our dear friend Alessandro Messina is still considered as part of the collection and history of Luciano Sorlini who also happens to be the owner of the blind-folded gander symbol and with the earmuffs shown on the tail of I-BIOH to state that he was the first non-professional civil pilot to have been given the IFR licence in the 50s 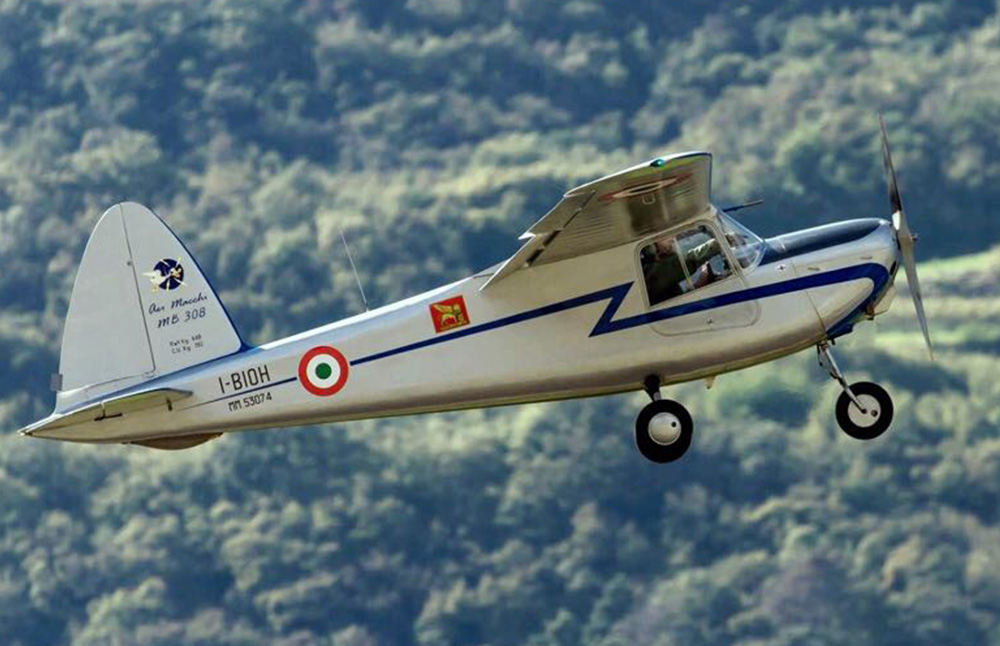